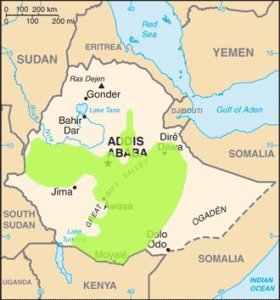 The country of the Oromo is called Biyya-Oromo (Oromo country) or Oromia (Oromiya). Oromia was one of the free nations in the Horn of Africa until its colonization and occupation by Abyssinia at the end of the nineteenth century. It is bordered by Somalia, Afar lands, Djibouti, Sudan, Kenya, Amhara and Tigre land or Abyssinia proper. The land area is about 600,000 square kilometers.

The Oromo people are one of the most numerous in Africa. Census data are not reliable but there are probably twenty million people whose first language is Oromo and who recognise themselves as Oromo. In older literature they are often called ‘Galla’. Except for a relatively small number of arid land pastoralists who live in Kenya, all their homelands lie in Ethiopia, where they probably make up around 40 percent of the total population.

The foundation of the economy of Oromia is agriculture. Around 90 % of the population is employed in the agricultural sector. An important product is coffee, as well as hides and skins, pulses and oil. Oromia also has important mineral deposits. There are gold mines at Adola and Laga Dambi in the Sidamo and around Nejjo, Asosa and Birbir river valley in Wallagga regions. Other important minerals found in Oromia are platinum, sulphur, iron-ore, silver and salt. In 1986, the Ethiopian government announced the discovery of a new deposit of natural gas in Baale. The hundreds of hot springs scattered over Oromia are also of economic importance. Thousands of people, including foreigners, visit these springs for their medicinal and recreational value. They are a great potential source of thermal energy. Rivers, streams and springs are plentiful. The rivers have many fails that could be used to generate electric power with little effort. The extent of this electric power could easily satisfy the power needs of Oromia and several neighboring countries.

The Oromo Liberation Front (OLF) is a political organization established in 1973 by Oromo nationalists, with the aim of leading the national liberation struggle of the Oromo people against the Abyssinian colonial rule. The emergence of the OLF was a culmination of a century old yearns of the Oromo people to have a strong and unified national organization to lead the struggle. The fundamental objective of the Oromo Liberation Movement is to exercise the Oromo peoples' inalienable right to national self-determination, to terminate a century of oppression and exploitation, and to form, where possible, a political union with other nations on the basis of equality, respect for mutual interests and the principle of voluntary associations. OLF's commitment to this objective is based on a democratic principle, that the Oromo people are endowed with the right to decide the type of sovereignty they want to live under and the type of political union they want to form with other peoples. The change made by the Tigrean regime, that grabbed power from the Amhara rulers in 1991, is far from enabling the Oromo people and others to realize this fundamental right. It is merely a cosmetic change intended to affect the momentum of our just struggle. The OLF reiterates that the struggle of the Oromo people is not directed against any people but the system of oppression. In fact, the OLF and the Oromo people are committed to the noble cause of laying a foundation for union of free peoples on the basis of their freely expressed will. The Oromo Liberation Front joined UNPO on 19 December 2004.

Prior to its colonization, the Oromo people lived under a remarkable and relatively complex age-grade based indigenous democratic system known as a "Gada" in which political, military and other leaders, including legal experts, are elected for non-renewable eight-year terms.

The Gada system has been undergoing changes since its inception to accommodate the development of society. Gada is a highly developed form of democratic life. It is a system that organises Oromo society into groups or sets of about 11 that assume different responsibilities in society every eight years. The foundations of the Gada system, starting around the end of the eighteenth century, were brought about mainly by events set in motion both from inside and from outside the Oromo society. In most communities the Gada system declined because of the protracted wars that preceded the onset of colonization. The end of the eighteenth century was marked by constant wars and skirmishes, which gave the war leaders a mandatory power. This weakened the outstanding democratic features of the Gada system. The second important factor that contributed to the weakening of the Gada system was the coming of new beliefs and religions. Islam and Christianity have significantly affected the culture of the Oromo people. Thirdly, the changes in the mode of living of several Oromo communities, as a result of the interaction of all these factors, were probably one of the important causes that led to the decline of the Gada system. These and other related factors led to the emergence of a new social system, which had a significant impact on the original ideals of the Gada values, which provided the Oromo nation admirable strength to fight against any external aggression and later the colonial occupation.

The Oromo were colonized during the last quarter of the 19th century by Abyssinia, with the help of the European colonial powers. The colonization process that brought about the present geographical shape of Ethiopia took the Abyssinians nearly 40 years. Nowadays, Ethiopia is an outcome of the scramble for Africa conspired in 1884/85 in Berlin. The successive colonial regimes banned all political, social and spiritual institutions of the Oromo and those of other colonized Peoples. During Emperor Haile Selassie’s regime (1930–1974), the only organizations allowed, under a strong vigilance, were a few self-help associations. In the beginning of the 1960s, there were three Oromo self-help associations which had their offices in Addis Ababa (Finfinne), namely the Jibat and Macha, Metta Robii, and Tulama Shawa self-help associations. These three associations merged in 1963 and formed the Macha-Tulama Self-help Association. It embraced all Oromos irrespective of religion and region and other non-Oromo nationalities who accepted the objectives of the association. The formation of the Macha-Tulama Association was a basis for the subsequent centralized leadership of the Oromo struggle for liberation. The Oromo and other peoples, which were conquered, neither accepted the colonial hegemony nor assimilated with the colonisers. The Oromo resisted Ethiopian colonial expansion and domination both militarily and culturally in localized and scattered ways during the second half of the 19th century and the first half of the 20th century.

Oppression was especially harsh and brutal under the imperial rule of Haile Selassie, of the Amhara ethnic group. During the reign of Haile Selassie the Oromo language was banned and speakers were privately and publicly ridiculed. The government did everything in its power to ensure the domination of the Abyssinian language and cultures over the Oromo people. Drought, famine, war and ill-conceived policies brought millions to the brink of starvation in the 1970s and 1980s. In 1974 this helped topple Haile Selassie. A self-proclaimed Marxist junta under which thousands of opponents, many of them Oromo, were purged or killed replaced his regime. Property was confiscated and defence spending spiralled. With the overthrow of the junta in 1991, the Tigrean Peoples Liberation Front (TPLF) dominated the ruling government of the Ethiopian People's Revolutionary Democratic (EPRDF), and joined with the Oromo Liberation Front (OLF) in co-authoring a democratic charter. Subsequently, the TPLF, consolidated its grip of power and further continued to deny Oromos their political autonomy. Like its predecessors, the government dominated by the Tigrean Peoples Liberation Front was vicious in its brutality against the Oromo people.

On May 15th 2005, Ethiopia held its third multi-party general elections. The first official result showed that the ruling party and opposition won roughly the same number of seats. This led to fraud allegations from the opposition parties. At least 36 people died during violent clashes in which authorities opened fire on protesters. The police detained more than 2000 people. On June 8 2005, Dawud Ibsa, the chairman of Ethiopia's Oromo Liberation Front (OLF) stated that his group would not accept the government's rigged victory in disputed general elections that where held on May 15. He warned that the conflict was going to escalate, unless the international community came out with a very committed stance to avert this situation.

The fifth Ethiopian national election is scheduled on 24 May 2015. The official starting date of the campaigns will be on the 14th of February, and the final result will be announced on the 22nd of June 2015.

Currently, only one member of the 547 members of the Ethiopian Parliament is not part of the government coalition. Many of the opposition party members are imprisoned, and are hereby part of the 30.000-40.000 political prisoners in Ethiopia.

The situation remains unsafe and critical. In April-May 2014, peaceful protests were held against the ‘’Addis Ababa Integrated Plan’’. During the protests many people have been killed, including students and children. Since the protests in 2014, many people have been detained and imprisoned, and this situation is still continuing. Students did not return to university, as they fled the region for their own safety. Many Oromo were detained because of their support to the Oromo Liberation Front (OLF).

According to a report of Amnesty International, at least 5.000 ethnic Oromos have been arrested between 2011 and 2014. The arrests were based on their actual or suspected opposition to the government.

The Oromo enjoy a homogeneous culture and share a common language, history and descent. Prior to its colonization, the Oromo had common political, religious and legal institutions. The Oromo people have a rich folklore, oral tradition, music and art. Although much of this culture and these traditions have survived harsh suppression, much has been forgotten and lost.

The traditional Oromo language is Oromiffa, the written form of which has recently changed to use the Roman alphabet. Oromiffa was banned during the regime of Haile Selassie, and Amharic was the only language taught in schools or used in the public sphere for decades. Thus Oromos who had formal education or grew up in urban areas can speak and write Amharic, while people in the countryside who were isolated from educational campaigns have continued to speak Oromiffa. Some Oromos may also speak Tigrigna, Somali, Arabic, or Swahili, but most Oromo refugees prefer to speak Oromiffa as a matter of cultural pride. Literacy in English is limited but growing, as more people take English as a Second Language (ESL) classes.

Traditional Oromo religious belief centers around one God, Waaqa, who is responsible for everything that happens to human beings. As Oromos adopted Islam or Christianity, they maintained the concept of Waaqa and incorporated their beliefs into the new religions. Another large percentage of Oromos are Christian. Christians are primarily Catholic or Adventist rather than Orthodox, as the Ethiopian Orthodox Church is associated with the dominant Amhara cultural group. Within the Oromo nation, Muslims and Christians have mingled peacefully. Those Oromos whose traditions still mirror the traditions of "Waaqefataa" are less organized, less visible and therefore less understood.