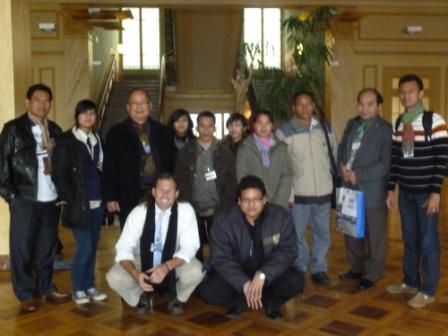 Last week (15th-19th February), a delegation from the Khmers Kampuchea-Krom Federation (KKF) participated in Cambodia’s review under the 76th Session of the Committee on the Elimination of Racial Discrimination (CERD) in the Palais de Wilson, Geneva.

Delegates from UNPO and the Khmers Kampuchea-Krom Federation (KKF), utilized the opportunity of a lunchtime NGO briefing session with experts on the Committee, as well as a meeting with Special Rapporteur Mr Pierre-Richard Prosper to draw attention to the unique situation of Khmer Krom in Cambodia who have fled persecution in Vietnam.

Mr Thach Thach, President of the Khmers Kampuchea-Krom Federation introduced the issue in his address at the briefing on 18th February, suggesting that obtaining documentation from Cambodia is when problems become apparent. He explained that whilst the Cambodian government has been clear in stating that Khmer Krom from Vietnam are entitled to Cambodian citizenship, there is a contradiction in reality leaving Khmer Krom living in legal limbo as they are neither treated as citizens nor as refugees. This affects their ability to access basic human rights since without identity papers, Khmer Krom find themselves discriminated against and unable to find regular employment, register births and marriages or own property.  Mr Thach provided photographic evidence to show that in order to receive ID cards, Khmer Krom have to change their identity so that their documents no longer state they are from Kampuchea-Krom and officially they no longer have a Khmer Krom name.

This specific situation was posed to Cambodia in the Special Rapporteur’s early questions to which Cambodia replied that ‘In principle, Khmer Kampuchea Krom are recognised as Cambodian citizens without any discrimination.’ In his address at Cambodia’s review on 18th February, Mr Prosper described the Khmer Krom’s situation as both a ‘fascinating’ and ‘complex’ issue, stressing that implementation of the law, which views all Khmer Krom as Cambodian nationals, requires a procedure that renders the law ineffective. He highlighted inconsistency in policy which requests Khmer Krom from Vietnam to present a Khmer birth certificate and permanent address in Cambodia. Mr Prosper recommended that action should be taken to ‘resolve the problem of citizenship once and for all.’

This procedural issue was re-iterated throughout the interactive dialogue by other experts including Mr Thornbury and Mr De Gouttes.  The debate was contextualized when Mr. José Francisco Cali Tzay posed a question about Venerable Tim Sakhorn, a Khmer Krom monk who had been residing in Cambodia since 1979.   He asked Cambodia to explain why despite possessing a Cambodian ID card, Tim Sakhorn was expelled to Vietnam on 30 June 2007.

Permanent Representative of Cambodia to the United Nations Office at Geneva His Excellency Mr. Sun Suon led the Cambodian delegation and explained that he understood there were difficulties regarding the residency requirements to obtain identification cards and agreed to encourage discussion in the Cambodian government on this issue.

Cambodia needs to guarantee a fair and transparent process of administering identity documentation to ensure consistency and equality in the treatment of Khmer Krom.  Guarantees need to be put in place for Khmer Krom to ensure there is no confusion about who holds the mandate of responsibility for their protection and they should not be forced to change their identity.  UNPO anticipates the concluding remarks with assurances from the Special Rapporteur that recommendations regarding the difficulties faced by Khmer Krom in Cambodia will be made.

For a copy of this Press Release click here

For evidence of changes made to identity documentation click here

For OHCHR Notes on the CERD session click here