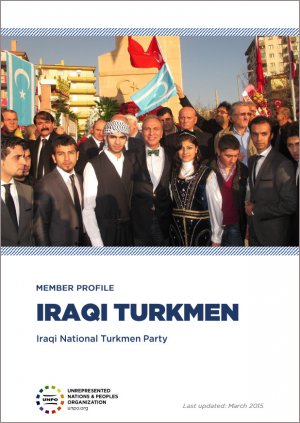 The Iraqi Turkmen are a community of around 3 million, predominantly present in the Iraqi provinces of Mosul, Erbil, Kerkuk, Salahaddin and Diya, Baghdad and Wasit. They represent the third largest ethnic group in Iraq (13% of the population) and, since 29 July 2012, they are officially recognized by the Iraqi Parliament as one of the three main ethnic components of the country’s population. Kerkuk is considered by the Turkmen as their capital city. This area, within the ‘Turkmeneli’ region of Iraq, produces nearly 20% of the Iraqi and 2.2% of the world’s petroleum. The Turkmen region has large natural resources such as oil, gas and Sulphur. In addition, there is an abundant production of wheat and cotton. However, the national Government in Baghdad and the Kurdistan Regional Government (KRG) constantly fight for the control of the oil-rich city, which has harbored for centuries a diverse population including Arabs, Kurds, Turkmens and Christians. The Turkmens are distinct in language and culture from both their neighbours, the Arabs and Kurds. Yet, the Turkmens are continuously denied political rights and systematically face attempts to assimilate them in the Kurdish or Arab identity.

At UNPO, the Turkmen community was represented by the following political organizations:

On 17 March 2014, an official of the Iraqi Turkmen Front (ITF) was shot dead. In consequence of the killing, the head of the ITF called on the Iraqi government to offer protection to Turkmen lawmakers. According to him, the attacks on ITF members had the aim to scare Iraqi Turkmens.

On 30 April 2014, legislative elections took place in Iraq. In the multi-ethnic province of Kirkuk, the election campaigns caused disputes, as Kirkuk is home to a number of different ethnicities, and as the elections would show ‘who really owns this troubled province’. Due to the disputes, there were tensions between the political candidates and consequent physical violence between supporters.  During the last general elections in 2010, the Iraqi Turkmen won two out of twelve seats, while the Iraqi Kurdish parties won six, and the Sunni Muslim Arabs four.

After the 2014 elections, the leader of the ITF, Arshad Al-Sahili, felt that the elections had run far from smoothly for the Iraqi Turkmen. He claimed that members of the community had to face severe impediments to get to the polling stations. According to Al-Sahili, the day before election-day there were severe explosions in Turkmen areas. The aim of these explosions was to intimidate Turkmens and to discourage them from voting. This resulted in a very low turnout at the election, as most people were afraid to leave their homes.

Furthermore, in 2014, after months of displacement, Iraqi Turkmen families returned to their destroyed homes. In the same year, the Iraqi Ministry of Immigration and Migrants recorded ten thousand internally displaced persons. This was a result of the tragic march of the Islamic State, which started its attacks on the northern province of Mosul earlier that year.

However, there was also some positive news in 2014. In November, in fact, the Turkmen language has been declared as one of the official languages by the Parliament of the Kurdistan Regional Government (KRG), in addition to Arabic and Kurdish. The law applies to all areas where the Turkmen population exceeds 20 per cent.