In response to the increasing number of human rights violations against the Baloch people, a public conference entitled “Balochistan Yesterday, Today and Tomorrow: Meeting the Challenges” was held in Bangkok, Thailand on 22-24 February 2010. 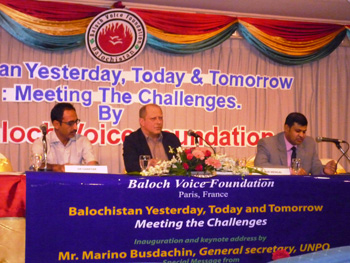 This initiative provided a platform for constructive debate and dialogue and to critically assess the human rights violations against the Baloch People. The Paris-based Baloch Voice Foundation, led by Mr. Munir Mengal, brought together Baloch leaders, scholars, civil society activists and political scientists, to  generate constructive ideas as to how to best respond to the increasingly dire situation in Balochistan. 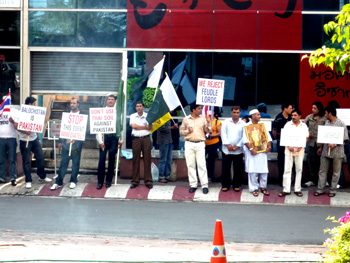 However, the conference was met by resistance from Pakistani protesters who led a demonstration in front of the conference venue on the first day. More than a dozen protestors called for the event to be immediately halted.

Mr. Marino Busdachin, General Secretary of UNPO, emphasized the impunity enjoyed by Pakistan military authorities, especially with relation to the enforced disappearances of many Baloch activists.  Busdachin described these disappearances as “criminal”, and at a level that can be no longer tolerated by the international community. Many of the speakers presented various cases of missing persons and harassment that implied the complicity of the state, and an absolute lack of awareness on the part of the international community.

In closing the conference, all participants signed the Bangkok Declaration that committed each signatory to collaborating together, and to using peaceful means to protect their rights to self-determination, language, culture, and identity. Additionally, participants called upon the international community to publicly express its concern at the crimes committed against the Baloch community and to ensure that pressure is brought to bear upon the Pakistani Government to ensure the implementation of an impartial justice system and the elimination of all enforced disappearances.

For the Introduction and the invitation to the “Balochistan Yesterday, Today and Tomorrow: Meeting the Challenges”, 22 – 24 February 2010, Bangkok, Thailand click here

For the Bangkok Declaration on “Balochistan Yesterday, Today and Tomorrow: Meeting the Challenges” click here

For paper by Baseer Naweed of Asian Human Rights Commission, “Conflict Over Balochistan will Undoubtedly Have Profound Negative Effects on the Entire Region” click here