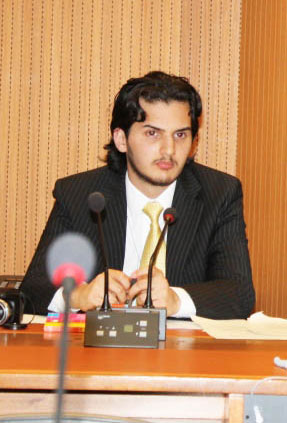 Human rights activist Mr. Noordin Mengal explains the role of the Pakistani government in the  atrocities taking place in the Balochistan province. He presents his case at a side event of the UN Human Rights Council, where not only the case of Balochistan, but also that of the Gilgit-Baltistan region was discussed.

Below is an article published by Business Wire India:

In a public meeting as a side event of the 12th Session of the UN Human Rights Council being held from 14th September to 2 October, 2009 in Geneva, Switzerland, participants said that state terrorism is responsible for human rights violations in Balochistan province of Pakistan and the Gilgit-Baltistan region administered by Pakistan. The meeting was organized by Commission to Study the Organization of Peace an NGO having UN Consultative Status with ECOSOC on the topic of Human Rights and Terrorism: International Responsibilities.

Dr. Sidi Cherif Secretary General, World for World Organization highlighted the impact of international terrorism on peace development and prosperity of international society. He said that there are conflicts and terrorist activities in almost all parts of the world: Asia, Europe, Americas and Africa. He emphasized that there is a need for international solidarity to fight this menace of international terrorism. Unfortunately it is very difficult to achieve international solidarity on this issue mainly because of the ambitions of different countries. In South Asia different nations organized terror activities against each other. It is very sad that some countries are patronizing terrorist groups like the Taliban and others only because they claim to be holy warriors serving one particular religion. He said that terrorists have no religion and they are going to harm every one.

Mr. Czarnecki, Member of the European Parliament emphasized that democracy is very important and the people should have strong belief in democratic values and systems. He said that social justice can be achieved rapidly through constitutional systems and not through international terrorism. He said that media, equality and education in a democratic society play an important role in realization of human rights and social justice across the world. Human rights is the responsibility of the international community. This can be achieved through the United Nations and its institutions like the human rights council. He said all religions of the world should be respected.

Mr. Noordin Mengal, a human rights activist presented a glimpse of the conditions of people living in Baluchistan. He said that Baluchistan is a Southern part of Pakistan and Baluchis are proud of their culture, language and secular traditions. The land is full of all types of resources and is on the way where Iran Gas Pipe is to be laid. It has a coastal line and has a strategic position. The Pakistan Government from 1948 is repressing the people of Baluchistan and there were as many as six instances of the Pakistan state unleashing its armed might against the people of Balochistan. There are rampant cases of rapes, torture and killings of the Baluchis youth. More than 4000 cases of forced disappearances are reported in Baluchistan. There are 52 detention centers in and around Baluchistan. There are protests by women of Baluchistan against disappearances and political assassinations. There was bombardment by Pakistan Army in Baluchistan. There is no freedom of expression and local and foreign media is not allowed to enter Baluchistan by the Pakistan Army. The websites of Baluchi people were blocked. The writers who wrote books were hanged to death.

Mr. Abdul Hamid Khan highlighted that Kashmir also included Gilgit-Baltistan which has been deprived of basic Human Rights and democratic privileges. Now the Pakistani Government is using its old suppressive tactics like they did in Balochistan for unilaterally taking over the area without the approval of the local citizens. This has been the usual tactic of the Government of Pakistan.

Mr. Suarup Singh Seehra, from United Kingdom mentioned that there are a lot of issues in the International Community for dividing India into different parts by groups like Khalistan International, but he was against the Idea as Khalistani groups had been banned in different countries and it had been established that the Khalistan movement had been by Pakistan.

International Human Rights Community reiterates its view that the killing of prominent political activists cannot be countenanced on any account. These incidents have been a major cause of the Balochistan and Gilgit-Baltistan peoples' alienation from the state. The Pakistan government must demonstrate its earnestness in preventing such targeted killings. At the same time the task of tracing the large number of people reported missing must be pursued with diligence. The cost of delay in these matters would be far too high.