Letter of UN Human Rights Prize Winner to the UN

UN Human Rights Prize laureate Mr. Biram Dah Abeid has written a letter to the United Nations on the occasion of the ceremony. The letter is available below.

Praise the lord and peace be upon Prophet Mohamed

Honorable Sirs and Madams, we can do nothing but greatly thank you, the UN and all its institutions, for having considered our case, the misery and plight of tens of millions of human beings who continue to live in slavery.

Amongst these countries who tolerate, if not perpetuate, this phenomenon, my own country, Mauritania, – alas! – has the worst track record in terms of population living as slaves. Considering this, the distinction you have awarded to me represents a precious assistance to the victims and a formidable demonstration of solidarity with militants of all obedience who rise against the denial of humanity, religious and ethnic persecutions, physical violence and withdrawal of liberty.

In 2013, more than at any other time in the history of the universal fight for our dignity, your gesture sends a strong message to oppressive rulers as they refuse to recognize and respect a person’s international rights. You are reminding through this award that – above States, institutions and identities – the individual remains the point of reference, the starting point of any ethics, the aim of all social conventions.

Today, dear friends, I would like you to hear the complaints and cries of people who are owned by others, since birth, and who are participants in forced labor, deprived of any remuneration, rest or education. In practice, they are human cattle with no civil recognition and victims of sexual violence – a servile group in which I was born and within which I refused to grow up. The dehumanization of these people goes beyond anyone’s understanding. The list of slavery practices – on top of castrating, selling and buying people like objects – is enshrined in codes of racial inequality which our legislators and the majority of upper-class Mauritanians believe are untouchable. Whoever violates and denounces this code is subject to a trial for apostasy. In this manner, Islam – our faith founded in revolt against inequality – is diverted and used for justifying racial prejudice. These practices, which my friends and I combat, have the status - in the eyes of Mauritanian legislators – of a law superior to international norms, including the Universal Declaration of Human Rights.

Such written codes that defend gender inequality and the eternal inferiority of women, as well as the legitimate use of their bodies and lives, are the only sources of law, including for our penal code, and organize personal statuses as well. Such laws were conceived and edited by jurists from the 10th to the 16th centuries. On top of this, there exists amongst our slave-practicing society almost a monopoly of stigmatization and decision of what the “absolute norm” might be. These affect the sources of law and the education of our magistrates, police officers, administrators, imams and scholars.

As I am writing, militants of my organization, the Initiative for the Resurgence of the Abolitionist movement (IRA), which you have chosen to honor through this prize, are rotting in jail. Their sole crime is to have attempted to defend a young girl who sought their assistance. This young girl, Noura Mint Aheimed, pressed charges against her owners who had her as a slave for the past 14 years. I salute, from the height of this tribune, these militants, both men and women, who just finished walking 150 km in a protest march to courageously and peacefully defend Noura.

Our fight against slavery, despite the moral and physical violence this practice represents, has always been peaceful and civilized. We are inspired by the great leaders of the fight against submission and ignominy, and most of all by the one who has just left us – my father and example Nelson Mandela, peace be with him.

You are rewarding, through this prize, our fight against slavery, against the continued servitude of people by other people. This fight is far from over. Your support will be helpful for what lies ahead and for the fight that we are starting on this day so that slaves and former slaves may claim back their rights over their land. The Mauritanian authorities must launch, without delay, a just and fair agrarian and land reform.

Slavery in Mauritania comes in many shapes and forms. Our country, alas, is known for chattel slavery, whereby you are born a slave. But we also have all other forms of slavery in Mauritania, and notably contemporary slavery. Very often and most naturally, the Haratins (slaves and former slaves) go from serving their masters to serving authoritarian employers. In the mining industry, merchandise ports and construction sites of all sorts, slaves are the employees, an easy prey for modern slave-owners today. Your help in this domain is always welcome as well.

Our organization, IRA, is still not recognized by the government of Mauritania and this is despite its daily presence alongside the victims of slavery and despite the support we get from the international community. We have helped to free and freed hundreds of slaves. But without the necessary support after being freed, these slaves still live in misery. It is time for the world to take notice of the plight of former slaves.

Dear officials of the UN, my duty is to testify before you and to tell the story of those hundreds of widows and orphans who saw their husbands, fathers, parents and neighbors disappear in the course of an ethnic cleansing operation which took place between 1986 and 1991. This has been passed on to us through the generations: the “crime” of ethno-linguistic diversity, despite this being one of the pillars of one of the UN’s most prestigious agencies, the UNESCO. Our political system makes you guilty of being Peulh, Soninké, Wolof or Bambara in a State that aspires to the illusion of a uniform Arabism. The victims of this period and ourselves are still trying to obtain the truth and are seeking justice, the restitution of our usurped lands, the reparations for the mass killings and the outright truth.

Dear Sirs and Madams, I also have to underline the arbitrary abuses Mauritanian citizens expose themselves to in the face of anti-terrorist laws, which are in full contradiction to the general principles such as the Habeas Corpus, the presumption of innocence, the separation of powers, mediation and the prohibition of torture. On this note, I would like to bring your attention to the case of 14 men who were detained for presumably being jihadists and who have since disappeared without being able to meet with their lawyers or families. Their fate remains unknown.

The Mauritanian system of domination benefits from the support of several Western powers on the basis of prevention of intolerance and of pseudo-religious terror. However, this is also related to the darkest sides of Mauritanian society: calls for death sentences and the inquisition against democrats and human rights defenders. At the same time, the government upholds double-standards and shows the free world what they want to see: modernity.

We hope that the UN will engage a frank and consequent relation with the authorities of Mauritania in order to eradicate inferiority from birth and impunity for racism. We demand that in case of non-cooperation with the UN all possible measures of retaliation be taken.

Long live international law, long live universalism as an alternative to cultural relativism and the insidious diplomacy of letting time decide for itself. 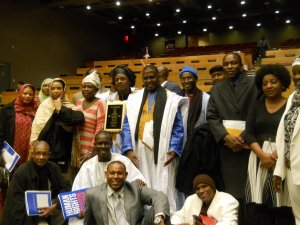