The Peace Caravan, which started on 24 January 2013, has arrived in Nouakchott after a succesful campaign across Mauritania against Haratin slavery. Several debates and gatherings have shed light on the obstacles remaining for the successful elimination of slavery.

IRA-Mauritania has celebrated the close of its Freedom Caravan against Haratin Slavery in Nouakchott. The Caravan was launched on 24 January 2013 in Nema, in the South West of the country.

Caravan followers spent Monday night [28 January 2013] in Boutlilimit. After a successful meeting, Boutilimit officials marked the occasion by organizing a dinner debate in Djenka, hosted by Yacoub Ould Salek. This was the occasion for a large intellectual debate between IRA leaders and Boutilimit officials (all political sensitivities included). Different subjects were raised, and the discussion was fruitful and friendly. 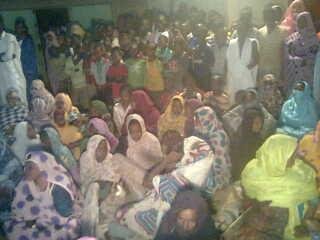 The Caravan left Boutilimit this morning [Tuesday, 29 January 2013] so as to organize a large gathering in Wad Naga, where IRA-Mauritania’s vice president, Mr. Brahim Ould Bilal, took the floor to remind the authorities that their reaction to the symbolic burning of books, which took place in Wad Naga, was shameful. He recalled that Wad Naga’s Senator, who leased a modest home to Biram, had thrown out the latter’s family after his arrest. He said that, thankfully, God had sent people to the family’s rescue to help them rebuild their own house while Biram was still imprisoned. 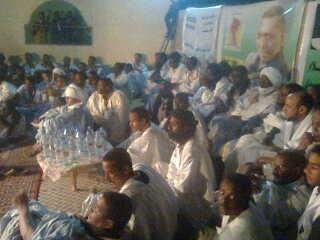 After arriving in Nouakchott around 1.30 pm, Caravan followers organized a gathering in front of the Youth Center in Nouakchott to announce the end of the Caravan and to evaluate its impact. IRA’s President spoke at a press conference for the occasion. 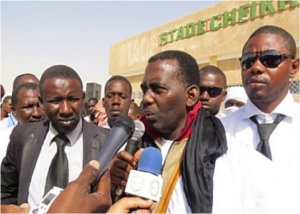 “We deplore that slavery, in all its forms, is still very present in the different regions of the country”, said Biram Dah Abeid at a press conference held near the National Security Headquarters.

He added, “we also note that anti-slavery laws are still not applied, and that the slavery code is maintained. The books that we symbolically burned on 28 April 2012 because they justify the practice of slavery continue to form the legal basis for the actions and decisions of the judicial police, imams and scholars of the Mauritanian constitution”.