“Peace Deal Paves The Way For Long And Enduring Peace”

The Moro people have been systematically marginalised and victimised in an overwhelmingly Roman Catholic country.  Not only have they been subjected to discriminatory employment and housing policies throughout the centuries, but they have also been frequently misportrayed in the media. The escalating tensions between the Philippine government and the Moro people have been fuelled in the last half a century by the illegal annexation of the Moro’s land by Christian-Filipino militias such as the Ilaga. This not only resulted in a gradual displacement of the Moro from their homeland, changing the demographics of the area but has also meant that the region has become impoverished and underdeveloped.

After nearly 40 years of conflict and the loss of around 120,00 lives, it was agreed on 15 October 2012 that the new region of Bangsamoro is to replace the existing region that was created in 1989 and has recently been depicted by President Aquino as a ‘failed experiment’.

The preliminary pact delineates the principles for addressing the so-called Bangsamoro question, determining the jurisdiction and structures of a new self-governance entity that will replace and have greater power, both political and economic, than the current Autonomous Region in Muslim Mindanao (ARMM). It also lays down the foundations upon which the new relations between the Central government and the one in Bangsamoro will be forged. 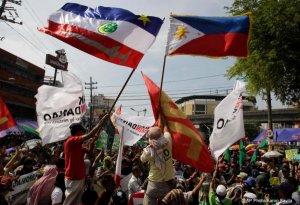 Mr. Aquino is expected to issue an executive order to form a 15 member transition commission which will facilitate the region’s development and that will formulate new legislation to create a new Muslim local government for Bangsamoro. A plebiscite will subsequently be held to determine the shape and size of the new Bagsamoro region.

However, both parties have warned that there is still much to do before the plan is effectively in place,  even though a final peace deal is intended to be reached by 2016, the year in which Mr. Aquino’s six year term ends. It has been suggested that the most crucial aspect of the deal is its implementation – its day to day management and on the ground effectiveness. Despite cautionary words, however, both Aquino and Ebrahims’s commitment and enthusiasm means that though long, the path is no longer a winding one.