Khmer Krom : “We cannot change the past but we can change the future” 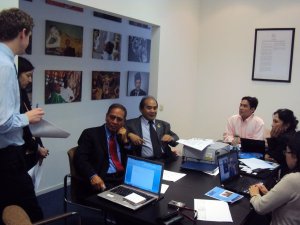 Representing the Khmer-Krom and the Montagnards communities in Vietnam, the delegation expressed their deep concern about the continued violation of human rights by the government of Vietnam, including restrictions on religious freedom, right to education, freedom of expression, freedom of assembly and movement. The delegation brought attention to the 181 recommendations voiced by European countries to improve human rights in Vietnam, but a large number of which the government of Vietnam has failed to consider or implement.

During constructive meetings it was agreed that the situation in Vietnam was an issue of concern, that a dialogue with the government of Vietnam had to be implemented regarding the human rights. The current situation of Khmer-Krom refugees in Cambodia were pointed out, and it became clear that it was also a matter to which European countries needed to give more consideration.

The KKF called for Vietnam to recognize the 54 ethnic groups that compose the country and to provide them all with basic rights, to be considered equals. The people met committed to plead in favour of Khmer-Krom recognition by domestic and international law to their respective institutions. This latest visit to Brussels marks the continuation of ongoing advocacy efforts to arise awareness amongst policy makers and will be backdrop to further initiatives in Autumn 2012.