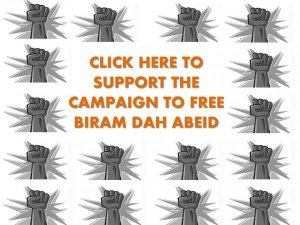 One month after human rights defender Mr Biram Dah Abeid was arrested, a peaceful anti-slavery march was violently cracked down. Several activists were severely injured, as was the wife of Mr. Abeid, Leila Mint Ahmed Khliva, [pictured below]. 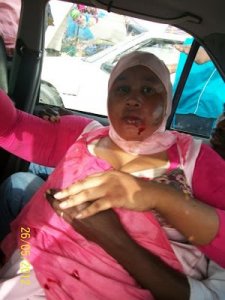 The President of the IRA, Biram Dah Abeid and his ten fellow prisoners were presented before the judge of Nouakchott on 29 May at midnight, still being denied any access to legal support. Biram Dah Abeid and seven of the activists were sent to prison, while three of them were released. To read the IRA press release on this matter, please click here.

The imprisonment of Mr. Biram Dah Abeid and ten other members or sympathizers of the IRA has highlighted the failure of Mauritanian authorities to properly implement the rule of law in ensuring the basic human rights of its citizens are upheld.

In an official statement, Marino Busdachin, General Secretary of the UNPO, urged the diplomatic community in Mauritania to:

1. Obtain visitation rights to meet with the detained individuals and assess the condition of their detention and any impact it may be having on their wellbeing or civil rights;

2. Ensure that Mr. Biram Dah Abeid and those detained with him are allowed access to adequate legal advice and support;

3. Call for the immediate and unconditional release of Mr. Biram Dah Abeid and the ten IRA members and sympathizers and the dropping of any charges placed against them which, based on available evidence, are motivated solely to frustrate and curtail their peaceful and legitimate human rights work in Mauritania.

Mr. Biram Dah Abeid, president of the IRA, was arrested on 29 April 2012 following his act of publicly burning several pages of a Malikite theological book, a text which asserts that slavery is a practice embraced by the Islamic faith. A further eleven people, all members and sympathizers of the IRA, were also forcibly detained during night raids in the days following the act.One of them was released immediately.

As the burning of books is not a crime under Mauritanian law, police were unable to serve the arrested parties with an official arrest warrant. But the eleven detainees, including one disabled person, were denied their right to legal counsel, and on 3 May 2012 were transported to an unknown location by the Mauritanian Secret Service (DSE).

“These books are in no way a reference to Islam but rather a reference to slave trade literature, to which dominant groups have given an Islamic stamp for the past centuries. However Islam has nothing to do with such enslaving practices that are inhuman and abhorrent, and to which slaves and black people have been exposed to in the Arab and Muslim world. For centuries, they legalized and gave religious background to practices such as castration, rape, corporal punishment, mutilation, dehumanization, labor without rest or payment, slave trade, family separation, etc.,  which are all practices that are totally unknown to the Koran and to the Sunna (word and deed) of the prophet”. (La Tribune, 30-4-2012)

Mauritania abolished slavery in 1981 - the last country in the world to do so. Only in 2007 it passed a law that officially criminalizes slave owners. So far, however, the Mauritanian court has prosecuted only one case. According to the United Nation’s Special Rapporteur on Contemporary Forms of Slavery, Gulnara Shahinian, 10% to 20% of Mauritania’s 3.4 million people are enslaved (CNN Freedom Project). Especially the ethnic group of Black Moors, the Haratin, have been the victim of slavery over the past centuries, up until today.

“It’s time that we recognize Haratinne [sic] who are the majority in Mauritania, as human beings”, declared Mr. Biram Dah Abeid in the interview with La Tribune, upon explaining the act of burning books. Article 19 of the International Covenant on Civil and Political Rights, to which Mauritania is a state party, protects freedom of expression, which includes “freedom to seek, receive and impart information and ideas of all kinds”. The United Nations Human Rights Committee has stated that this right “embraces even expression that may be regarded as deeply offensive.”

The long history of harassment against IRA and the charges of threatening state security, which appear to be unrelated to the facts reported to have happened, prove that Biram Dah Abeid's detention is solely motivated by the will of the Mauritanian authorities to break his legitimate and peaceful work to eradicate slavery in Mauritania and to urge the authorities to implement the rule of law.

The UNPO is organizing a conference on Contemporary Slavery in the European Parliament on 27 June 2012.

For more information, please consult the UNPO Emergency Briefing and the UNPO Press Digest on the arrest of Mr. Biram Dah Abeid.

Media Coverage of the Arrest:

1 June 2012, CNN with a message of solidarity, referring to UNPO.

29 May 2012, The Observatory for the Protection of Human Rights Defenders Declaration

29 May 2012, The Guardian on Protests in Mauritania

23 May 2012, Waging Non Violence on Protests in Mauritania

15 May 2012, Declaration of Maghreb Civil Society

14 May 2012, Parliamentary Question in the European Parliament of Mr. Fiorello Provera, MEP

4 May 2012, Amnesty International, Appeal for Action

30 April 2012, La Tribune, Interview with Mr. Abeid before his arrest

Background Information on Slavery in Mauritania:

Report of the United Nations Special Rapporteur on Contemporary Forms of Slavery,Gulnara Shahinian on Mauritania.

The United Nations Refugee Agency published, in conjunction with the Observatory for the Protection of Human Rights Defenders, a report in 2011 that addresses the harassment against human rights defenders in Mauritania who denounce the practice of slavery.

The CNN Freedom Project on Mauritania as ‘slavery’s last stronghold’.

Final Conclusions of the Interparliamentary Meeting of the Delegation for relations with the Maghreb countries and the Arab Maghreb Union in Nouakchott, 23 february 2012.