UNPO Event Draws Attention To "Climate Of Fear" In Balochistan

Below is an article published by UNPO:

UNPO and the Society for Threatened Peoples hosted a parallel event on Thursday [15th September 2011] at the 18th Session of the United Nations Human Rights Council titled ‘Climate of Fear: Enforced Disappearances, Extra-judicial Killings, and Arbitrary Detention in Balochistan’. Immediately prior to the event, UNPO and the Baloch community in Europe participated in a demonstration calling attention to the human rights situation in Balochistan.

Balochistan is a region that makes up 44% of Pakistan’s territory and holds a vast amount of mineral wealth. Tensions between Baloch communities and the Pakistani government in Islamabad are at an all time high as the newly elected government of Pakistan has failed to deliver on its 2009 promise ‘The Beginning of Rights of Balochistan’. This election promise was meant to be the first step in promoting reconciliation between the Baloch communities and the government of Pakistan - as a way to right the wrongs of the past. However, inequalities between Balochistan and other provinces in Pakistan are still significant; the Baloch believe these gaps are the result of deliberate discrimination by the Pakistani government.

The demonstration took place under the ‘Broken Chair’ outside of the United Nations Palais des Nations building, where representatives of UNPO and the Baloch community held signs and banners calling for an end to the human rights abuses that are occurring in Balochistan. The aim of the protest was to raise awareness of the increasing number of enforced disappearances and extrajudicial killings taking place within the region.

The event, chaired by UNPO Programme Coordinator Lisa Thomas, drew attention to the disturbing level of enforced disappearances and extrajudicial killings currently ongoing in Balochistan, Pakistan, as noted by recent extensive reports from Human Rights Watch (HRW) and the Human Rights Commission of Pakistan (HRCP). Ms. Thomas expressed UNPO’s deep concern about the deteriorating situation in Balochistan before highlighting a few key points from the two reports. Of particular note according to Ms. Thomas is HRCP’s discovery of strong evidence indicating the complicity of Pakistan’s security forces in the enforced disappearances and killings that HRW calls a “disturbingly regular feature” of the conflict in Balochistan. 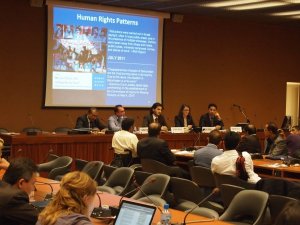 Sanauallah Baloch, a former representative in the Senate of Pakistan, started off the event by describing the source of tensions within Balochistan with particular emphasis on the strategic importance of Balochistan in the economic development of Pakistan as a whole. Senator Baloch illustrated the existence of poverty in Balochistan by using the example of gas, explaining that gas exploitation was far greater than consumption, even though more gas is needed within Balochistan. This exploitation of natural resources does not include the participation of the Baloch peoples, nor has it financially benefited the region. Senator Baloch also noted that this marginalization of Baloch peoples within political and economic spheres has angered many who feel that they are being unfairly treated.

Samad Baluch, Secretary General of the Baloch Human Rights Council, emphasized the targeting of journalists in Balochistan, a particularly disturbing feature of the ongoing abuses in the region. Mr. Baluch emphasized the importance of national and international journalistic access to the region, particularly given the role of journalists in putting a spotlight on crimes such as enforced disappearances and extrajudicial killings; the lack of information in the region allows perpetrators of such abuses to continue with impunity, and perpetuates a climate of fear.

Lakhu Luhana, the Secretary General of the World Sindhi Congress, discussed the similarities between the situation in Sindh and that in Balochistan, highlighting some of the systemic issues allowing human rights abuses to continue in Pakistan. Dr. Luhana urged the international community to directly intervene as they have done in Libya to stop the abuses from spiralling out of control.

Noordin Mengal, a Baloch representative and activist, provided a more detailed overview of the recent reports being highlighted by the event, including the July 2011 report “We Can Torture, Kill, or Keep You for Years” by Human Rights Watch, and the May 2011 Human Rights Commission of Pakistan fact finding mission report titled “Blinkered Slide into Chaos”. These reports highlight the political nature of targeting and point to clear evidence of the involvement of Pakistan’s security forces in the attacks. Baloch people have been left with no means of speaking out against the injustices they suffer, especially as the torture of political activists and journalists is said to be commonplace and committed with impunity.

Mr. Mengal noted that the use of enforced disappearances and extrajudicial killings in Pakistan is not new, but emphasized that the situation in Balochistan is getting progressively worse. Baloch nationals, generally males between the ages of 20-40, are the targets of disappearances that frequently occur in broad daylight and in busy locations. Many of those disappeared are held incommunicado for long periods, during which time they are subjected to extreme methods of torture. Many more are killed and their bodies dumped on the side of the road. In his conclusion, Mr. Mengal called for the international community to intervene in Balochistan providing space and security that would allow the Baloch people to exercise their right to self-determination; he cited the cases of East Timor and South Sudan as examples.

Balochistan's political situation, particularly its strategic importance to Pakistan and the perception by Pakistan's government that Baloch nationalism is a threat to its strategic interests, was cited by numerous speakers as a major factor allowing abuses to continue. In response to a comment from an attendee noting the presence of an elected government and an independent judiciary in Balochistan, Mr. Mengal countered that the Chief Minister of Balochistan has repeatedly spoken about his powerlessness, particularly as a result of the actions of the Frontier Corps (FC), a paramilitary force responsible for human rights abuses in Balochistan which is said to be operating a parallel government outside of all civilian oversight mechanisms. Emphasizing the role of Pakistani military and intelligence agencies  in the abuses in Balochistan, Mr. Mengal also cited an interview given to the BBC in February in which the Chief Minister stated that some of the abductions and killings are "definitely" carried out by the security agencies. HRW and HRCP have both implicated Pakistan's intelligence services, the Frontier Corps and local police in the abuses.

Participants at the demonstration and parallel event called for greater cooperation between the government of Pakistan and the United Nations Human Rights Mechanisms, for example through accepting country visit requests from the Special Rapporteurs, Independent Experts and representatives of OHCHR Working Groups to conduct their own independent studies into Pakistan’s human rights record. Event participants also discussed the importance of increased accountability of the Pakistani government to international human rights standards and obligations. Though the Government of Pakistan has ratified the Convention against Torture and Other Cruel, Inhuman or Degrading Treatment or Punishment and the International Convention on Civil and Political Rights, both of which prohibit the use of torture under any circumstances, it did so only with multiple reservations undermining the force of both treaties. Additionally, Pakistan has not yet signed the International Convention on the Protection of All Persons from Enforced or Involuntary Disappearance.