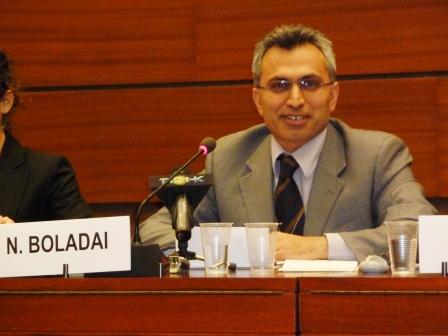 UNPO representatives addressed Permanent Missions in the UN on Friday 12 February to decry the situation of minorities within the Islamic Republic of Iran, just days before Iran comes under examination in their first ever Universal Periodic Review at the UN Human Rights Council.

The event hosted by Interfaith International and UNPO provided a platform for debate and discussion of rights violations with a particular focus on the Baloch, Ahwazi Arab, Azerbaijani Turk and Kurdish minorities.

In reference to the obstacles placed before religious and ethnic minorities in the workplace and to gain access to university, Mr. Nasser Boladai from West Balochistan denounced life for many citizens in Iran as a form of “apartheid about which the world is unaware”.

Mr. Loghman Ahmedi elaborated on these restrictions reminding the participants of the inherent contradictions in the Iranian constitution. Ahmedi noted that the constitution prevents women and any non-Shia from being elected as President, despite provisions in Article 19 that pledges ‘color, race, language, and the like, do not bestow any privilege’. A significant proportion of Iran’s minority groups are Sunni Muslims, and are therefore entirely excluded from many political processes.

Global media attention has been drawn towards the post-election demonstrations in Iran and around the world, but many Iranian minorities boycotted the elections well in advance of the opening of polling stations in June last year once their candidates were forcibly excluded from running by central authorities.

Mr. Adnan Torfi, representing the Ahwazi Arabs described the situation for minorities as that of second class citizens, whose land and natural resources were plundered without any benefit for local health or education facilities, generating a poverty trap for millions.

The situation of other minorities was also addressed, with Mr. Boladai describing the discrimination and imprisonment of Baha’is in Iran as “absolutely disgraceful”.

The testimonies validated a European Parliament resolution adopted this week that denounced the “systematic harassment” of religious minorities and the ongoing “campaign of arbitrary arrests and executions against Kurdish, Azeri Baluch and Arab civil society and political activists”.

It is hoped that the event will lead to the predicament of minorities being raised during Monday’s Human Rights Council review of Iran. Iranian authorities will be asked to comment on their recent human rights record and will accept or reject formal recommendations made by states. In a mark of the serious nature of the human rights situation in Iran, it is believed that around 90 states have requested to make a formal intervention during the Review, but time will most likely limit participation to 50.