UNPO Report: "Repression in China- Roots and Repercussions of the Urumqi Unrest" 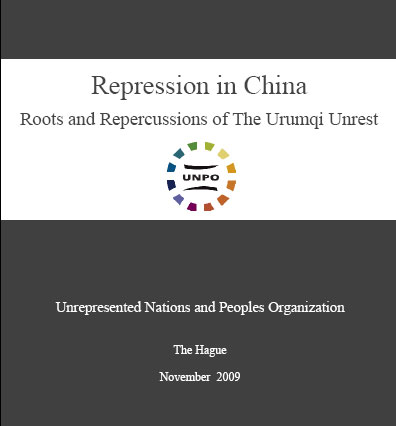 Today [Friday, 13 November] the UNPO publishes a report entitled "Repression in China: Roots and Repercussions of the Urumqi Unrest".  The report comes after this past week's round of meetings in Brussels, which culminated in the Presidency of the European Union releasing a statement condemning the recent executions in East Turkestan.

The General Secretary of the World Uyghur Congress, Mr. Dolkun Isa, and UNPO General Secretary, Mr. Marino Busdachin have concluded a round of meetings in which Members of the European Parliament (MEP) pledged to act in condemning executions that took place in East Turkestan this month.

The visit precedes the publication of a UNPO report today entitled “Repression in China: Roots and Repercussions of the Urumqi Unrest”. The report outlines the events that took place in Shaoguan and Urumqi this summer in which hundreds of people were killed. It also issues a series of recommendations for future action to assuage the resentment and mistrust that has been allowed to develop in East Turkestan over the past five decades as a result of policies pursued by the Chinese government.

The visit to Brussels was prompted by the announcement from Chinese authorities that nine individuals had been executed for their role in the unrest that affected Urumqi in July 2009. Their executions came after cursory trials that were carried out in a highly politicized fashion and in which those accused were not afforded proper legal representation.

Mr. Busdachin welcomed a statement of condemnation released by the Council of the European Union on 12 September 2009, but stated that the “EU must do more to ensure its position remains consistent and firm…otherwise Beijing will continue to repress East Turkestan without censure at the cost of innocent lives.”